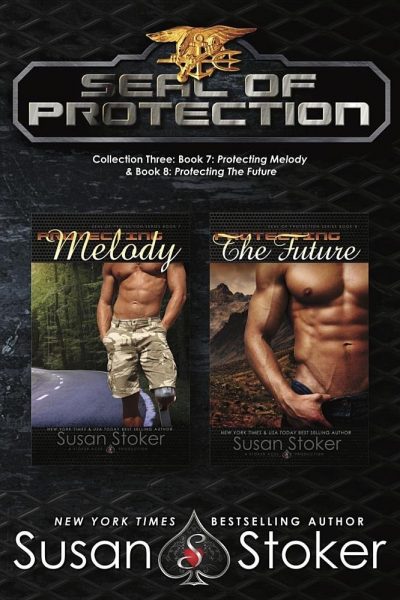 Get books seven through eight in the SEAL of Protection Series in a convenient low-priced package today. Over 400+ pages for suspense and hot Navy SEALs.

Get books seven through eight in the SEAL of Protection Series in a convenient low-priced package today. Over 400+ pages for suspense and hot Navy SEALs.

Book 7: Protecting Melody
Tex gave everything he had to his country and his SEAL teammates. When an IED took away part of his leg, and his career, he devoted himself to his country and friends from behind his computer. He’s always been the man that can find anyone, that uses his computer skills, legal and illegal, to keep people safe and to put the bad guys behind bars.
But behind a computer is a lonely place to be. While he might put on a good front, Tex can’t help but feel he’s missing out when he sees how happy his friends are. But when the woman he’s been talking to online for the last six months suddenly disappears without a word, Tex knows it’s time to step up, and use his skills for himself this time.

Book 8: Protecting the Future
Wolf and his fellow SEAL team members have saved many lives, and been in even more harrowing situations, but their latest mission might prove the most difficult of all. Charged with rescuing American soldier, Sergeant Penelope Turner, from the clutches of ISIS, the men infiltrate the refugee camp where she’s believed to be held. The conditions are horrific, the search nearly impossible, but Penelope herself could prove the key to their success…if the SEALs can interpret her clues.
An unforgiving desert, perilous mountain terrain, a rising body count and insurgents on the hunt…all of this and more stands between the SEALs completing their mission and returning home to their women, left to bravely deal with fears of their own stateside.

Sometimes a mission is more than one team can handle. With a little help from newfound friends, the SEALS won’t stop until they’ve won the day. Failure is not an option.